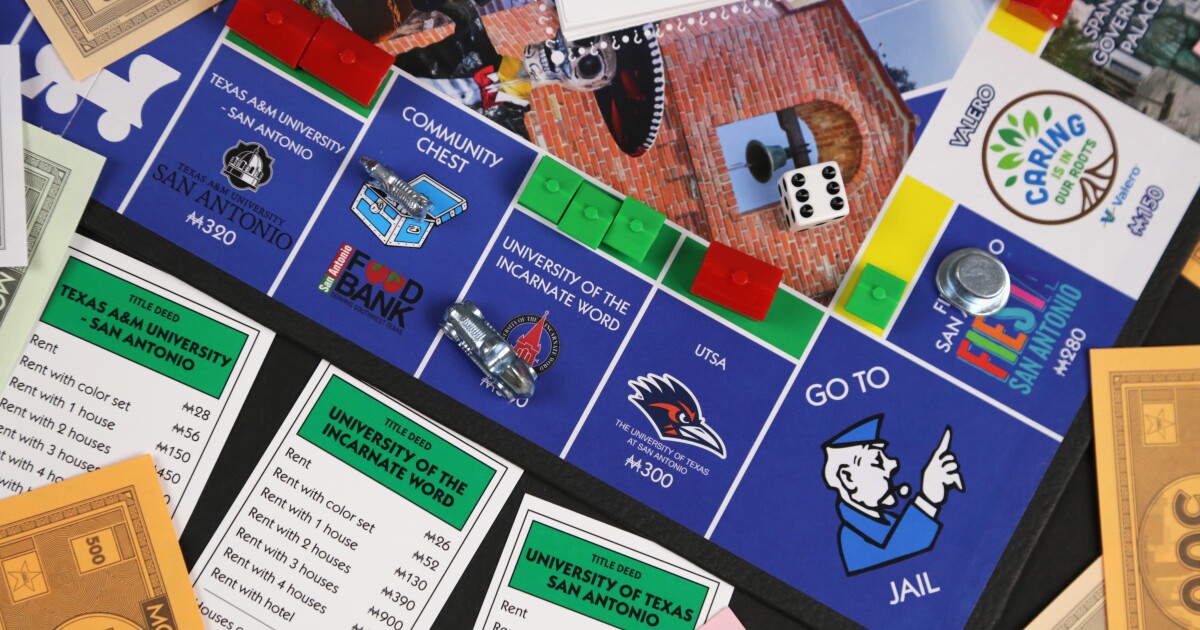 
After the University of Texas at San Antonio paid a mark-up of 70 times the list price for a small square of property, it’s safe to say that no other investor has been ripped off quite as badly in today’s hot real estate market.

No, this isn’t a story about some crooked land deal gone sideways. We’re talking about the board game Monopoly — specifically, its San Antonio edition. UTSA’s spot on the board cost the university $21,000, though players will be able to snap up the square for much less — 300 in Monopoly money, to be exact.

Produced by Top Trumps USA and licensed by Hasbro, this take on the game swaps out the classic properties like Marvin Gardens and St. James Place for local landmarks. On the San Antonio board, gone are the spaces for Electric Company and Water Works, making room for the oil refiner Valero Energy, which is headquartered in the city. Replacing underrated Kentucky Avenue? Dignowity Meats. And rounding out the board in Boardwalk’s prime spot — the Alamo.

UTSA sits alongside two other higher-education institutions in the game’s green-bannered squares, which is generally the second-most expensive property set. The three are situated just after the “Go to Jail” corner square, where Pacific, North Carolina, and Pennsylvania Avenues normally appear.

For $21,000, UTSA finds itself shoulder-to-shoulder with the University of the Incarnate Word and Texas A&M University at San Antonio. Other institutions appear on the game boards for other cities. In Worcester, Mass., the College of the Holy Cross takes TAMUSA’s spot on that board. And repping for nearby Cambridge? Harvard University, the Massachusetts Institute of Technology, and the Hult International Business School.

To be featured on the board, some institutions had to pay up. Per the $21,000 “bronze” package, UTSA purchased itself the right to be promoted on a single square of San Antonio’s board. “Silver” package buyers willing to shell out $36,000 acquired not not just a promotional board space, but also a customized Community Chest card. And for TAMUSA? The “gold” package afforded it a board space, a customized Community Chest card, 24 units of the game itself, as well as image-space in the center of the board and on the box lid to promote its campus. Total cost: $60,000, according to invoices and correspondence obtained via public-records requests. TAMUSA also bought more units to give away — 384 games, to be exact, worth another $8,900.

In other cases, universities won spots on their community’s boards without spending a cent.

Taken together, the varying transactions and financial arrangements provide insight into the ways that institutions of higher education try to foster brand awareness, bolster student recruitment, and milk their status as cultural landmarks.

Was this a good investment for these universities and colleges? The institutions not only obtained the opportunity to associate with a well-known and beloved brand, but also gained a novel means of reinforcing community ties within their region, said Sara Wallace, associate vice president for media and marketing strategy at SimpsonScarborough, a branding and marketing firm catering to the higher-ed sector. Wallace also said that such promotional ventures should be complemented with a broader branding or outreach strategy.

Why go big — $60,000 over three years — on a board game? Civic pride, said Jesse Pisors, TAMUSA’s vice president for university relations and advancement. “We pursued the Monopoly Board opportunity because it was a way to celebrate the university as part of the broader San Antonio community,” Pisors wrote in a statement to The Chronicle.

Texas A&M at San Antonio also used the games for fund raising. At a university-sponsored unveiling event of the San Antonio edition, the proceeds from sales of each unit benefited TAMUSA’s student organizations. The university also gave game sets to student leaders as holiday gifts. And the games are also available for purchase on TAMUSA’s website.

A spokesman for the campus described its arrangement with Top Trumps as “a fun way to create greater awareness of San Antonio and UTSA and to reach prospective students and their parents.”

Representatives for the University of the Incarnate Word did not respond to an inquiry from The Chronicle for comment. But online accounts associated with the institution have promoted the university’s partnership with the Monopoly brand.

Officials at Holy Cross touted its relationship with the game maker but declined to disclose how much it paid to be featured on the game board for Worcester.

“Holy Cross is proud to be a member of the Worcester community and we were very happy about the opportunity to be featured on the Worcester Monopoly edition,” a spokesman wrote in a statement.

Less happy were the business owners, patrons, and other locals whose favorite institutions failed to make the cut for promotion on the Worcester board. One tavern owner called the arrangement with Top Trumps “a pay-to-play situation,” and even went so far as to feed Monopoly game boxes into a roaring wood chipper while a Wall Street Journal reporter watched.

Not all institutions needed to pony up cash, though, to take a place on their city’s board. Neither Harvard nor MIT spent a dime to be featured in the game Top Trumps produced for Cambridge, Mass., according to statements from the two universities. A Harvard spokesperson clarified that the university elected not to charge Top Trumps any royalties or fees for the company’s use of the university’s name and brand.

“Harvard participated to be helpful to the community,” the institution’s spokesperson said. An MIT representative wrote something similar in response to a Chronicle inquiry: “The Institute ultimately agreed to allow an MIT square because the theme was the City of Cambridge.”

Hult International Business School, however, had to pay for its spot on the board, though a representative said Top Trumps quoted it lower “bronze,” “silver,” and “gold” fares than those priced for TAMUSA and UTSA. Hult knew it would be featured underneath green-bannered squares alongside other institutions of higher education, said Markus Mandl, Hult’s chief marketing officer, though it didn’t know which ones specifically.

“We felt this would be a fun way to celebrate our presence in Cambridge as the global hub of higher education,” Mandl wrote in an email.

More universities might appear on future boards. An edition of the game set in the Hamptons, on New York’s Long Island, is currently available for pre-order on the Top Trumps site, with additional iterations of the game in the works for Napa Valley, Corpus Christi, Lake Tahoe, Sacramento, Pittsburgh, Scottsdale, and Philadelphia (specifically, the Main Line).

Top Trumps isn’t shy about the substantial business it expects to generate in the coming years from colleges and universities in those places and beyond.

“It’s been fantastic to have so many prestigious colleges feature in our games in the U.S. and further afield,” Benjamin Thompson, a company representative, wrote in an email. “We’re looking forward to partnering with plenty more colleges on our city editions of Monopoly for years to come.”

Tags: & Advancement, College of the Holy Cross, Communications, Harvard University, Hult International Business School, Marketing, Massachusetts Institute of Technology, Texas A&M University at San Antonio, University of Texas at San Antonio, University of the Incarnate Word
We use cookies on our website to give you the most relevant experience by remembering your preferences and repeat visits. By clicking “Accept”, you consent to the use of ALL the cookies.
Cookie settingsACCEPT
Privacy & Cookies Policy